Home > Blog > International Day of Forests
Recent Posts
Design at a distance: how you can use Sonae Arauco’s 3D simulator to choose your dream designRenovating during and post-lockdownCOVID 19 our safety protocolsGive your home a décor refreshSustainability in your home 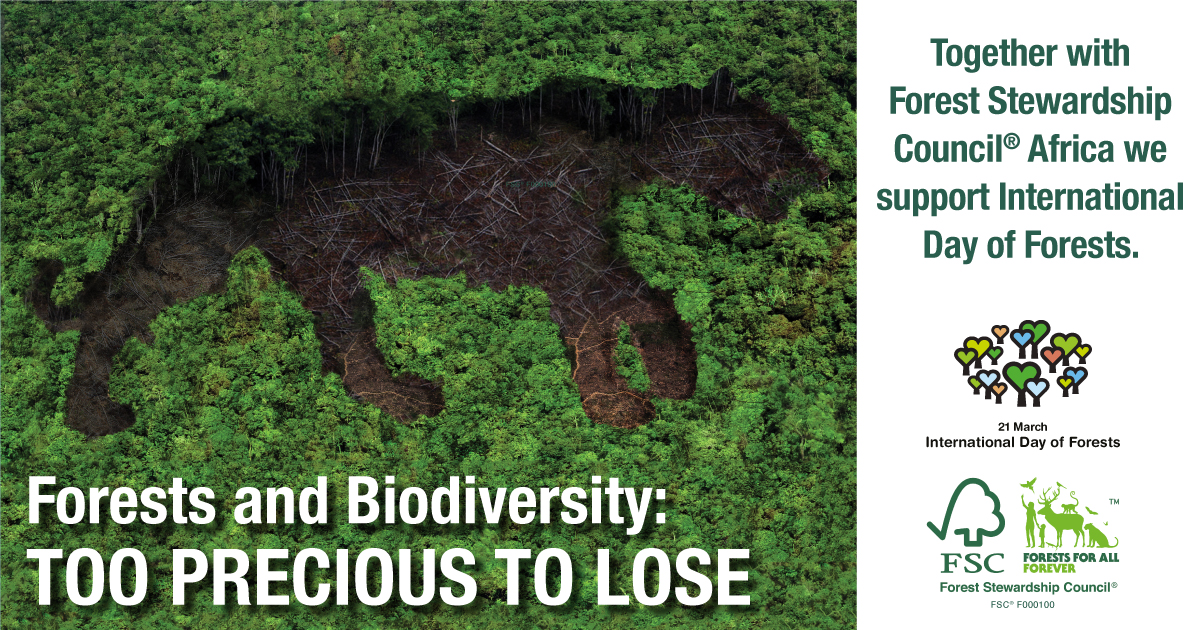 FSC was founded to promote responsible forest management globally and its certification scheme is now being applied in around 203 million hectares, covering one sixth of the world‘s production of industrial roundwood. Its standards have been developed and reviewed through balanced, multi-stakeholder decision-making processes, with the active involvement of world-leading environmental organizations (including the World Wildlife Fund and Greenpeace), and representatives of workers‘ groups and Indigenous Peoples, as well as researchers, foresters, and forest industries.

The FSC forest management standards place strict requirements on forest managers to prevent deforestation, avoid forest degradation, and maintain biodiversity and ecosystem functions. Only those forest managers that meet these standards are granted FSC certificates, and this certification remains in place for only as long as they are met. 2   (FSC:2019)

FSC certification can also be used for the afforestation of degraded lands and soils, mountain ecosystems and natural habitats . FSC-certified forest managers must prevent the "poaching and trafficking of protected species of flora and fauna" as well as avoid (or at least minimize) the use of alien species. 2 (FSC:2019) Moreover, FSC certification focuses not only on better policing of forest management units, but also on prevention of degradation by offering better livelihood opportunities for communities neighbouring or affected by certified forests.

We use the HCV approach – identifying, managing and monitoring – in our certification standards (which influence FSC-certified forests or products) and more generally as a resource for conservation planning. FSC seeks to maintain, enhance and promote the importance of these values.

A key part of HCVs is ensuring activity in forests does not have a negative impact on biodiversity – that is, the diversity within and between species, and the ecosystem as a whole, including forests. For FSC, maintaining and implementing management of biodiversity and HCVs goes hand in hand.

HCVs are applicable to any operation, big or small. As a small or community producer, you can ensure that your current activities are not affecting the overall biodiversity of your area and find out how HCVs apply to you.

Namibia is home to a third of the world‘s cheetah population, and the Namibian CCF is committed to protecting this vulnerable species.

Namibia‘s cheetah population has already halved and CCF estimates that there are only 7000 cheetahs left in the wild. To protect the cheetahs, CCF works with local communities to improve biodiversity and open dialogues with local farmers.

A problem for the Namibian cheetah is bush encroachment, a phenomenon referring to the undesirable thickening of bushes and trees. Cheetahs once thrived in the mixed woodland savannah of central Namibia, but human disturbance, overgrazing, fire suppression and removal of browsers like elephants and rhinos tilted the balance of grassland and trees. Thorn bushes choked the landscape, making it impossible for cheetahs to run or hunt.

CCF came up with a process that could use the bush while restoring the ecosystem. They started using the thorn bushes to produce fuel bricks – called Bushblok – that can be sold to support the work. The clearing of land is not just about creating space for cheetahs; Bushblok also means job creation in a region where unemployment is high. Bushblok employs 30 people, and as the industry grows, so will jobs. FSC certifies that CCF‘s woodland practices are sustainable and the Wildlife Friendly Enterprise Network certifies that the products deliver improvements for wildlife. 3 (Leading the Race for the Survival of the Cheetah | Forest Stewardship Council, 2020)

IFO‘s lumberjacks only cut one tree every two hectares – the equivalent of two football pitches – on average. The concession is divided into 30 different areas, and only one of these areas gets harvested annually to let other sections of forest regenerate for 30 years.

Additionally, 27 per cent of the total forest surface is set aside permanently to preserve the trees, providing valuable resources for local populations – including local Indigenous Peoples – and providing shelters where there is a high concentration of animals and rare plant species.

All these measures have proved to be positive for the conservation of gorillas. In turn, gorillas who are big fruit eaters, contribute to forest regeneration by spreading seeds across the rainforest.

Certified forest concessions under FSC are also required to maintain constant dialogue with local communities to help protect their interests, keep them informed of the company‘s harvest activities and to some extent, provide jobs. Through this dialogue, the company educates forest inhabitants about the benefits of managing forests sustainably and preserving their flora and wildlife.

This growth in gorilla population tends to prove that contrary to common belief, gorillas can coexist with lumberjacks provided the loggers respect their natural habitat. The presence of the IFO lumberjacks seems to keep poachers away and contribute to an increase in the area where gorillas can feel safe – now twice the size of Belgium. 4 (In New Documentary, Sustainable Forestry Sees Gorillas in Congo Thrive | Forest Stewardship Council, 2019)

A new study by conservationists from San Diego Zoo Global and the Bronx Zoo-based Wildlife Conservation Society (WCS) has found that jaguar populations can thrive in well-managed FSC forests.

The study, titled ‘Do responsibly managed logging concessions adequately protect jaguars and other large and medium-sized mammals? Two case studies from Guatemala and Peru‘ published in the journal Biological Conservation, were carried out in forest concessions certified to FSC-standards in Guatemala and Peru. (Tobler et al., 2018) 5

To conduct the study, the research team set up camera traps to measure how effective these concessions are in maintaining healthy populations of land mammals, with a focus on jaguars (Panthera onca), the Western Hemisphere‘s largest cat species.

Deforestation is largely responsible for habitat loss of species that thrive in biodiverse regions of Central and South America, home to jaguars, tapirs, peccaries and other species. Studies such as this one offer a measurement of the impact of logging operations on wildlife and how low-impact timber management, as practiced in FSC-certified concessions, can be effective in conserving species such as the jaguar, classified as near threatened on the International Union for Conservation of Nature (IUCN) red list